By continuing to visit this site, you accept the use of cookies by Google Analytics for statistical purposes.

Energy bills are driven by both the price of energy on the wholesale market and Third-Party Costs (TPCs). TPCs include non-energy costs set by the government, network (the National Grid), policy and system costs and electricity transmission and distribution costs.

The biggest single cost on a bill is the price of the energy. The wholesale cost of the energy makes up approximately 40% of an electricity bill and 70% of a gas bill, with the remaining being TPCs, which have been continuously rising in recent years and can be volatile as we saw in 2021.

This pricing report will focus on the energy element of a bill to help you keep track and understand the wholesale energy market and the factors affecting the price of your contracts.

2021 saw the market price for gas reach unprecedented highs. Energy bills increased for millions of residential customers and businesses and over 25 energy suppliers collapsed as the market went through one of its most tumultuous years on record.

These highs have continued into 2022, due to energy stores being low since 2020, together with planned and unplanned outages and the colder winter months meaning there is more reliance on gas to meet consumer demand.

Supply to Europe from Russia has continued to be restricted with the government redirecting flows usually meant for Europe elsewhere, to help further push the Nord Stream 2 pipeline.

We have started to see wholesale prices decrease slightly however, Russian gas flows remain limited into Europe, and it is difficult to predict what will happen with future energy prices given how volatile the market has been in the last six months.

Energy prices do usually come down when the temperatures increase, but current trends suggest prices are still likely to be considerably higher in 2022 than in recent years.

Gas and power contract prices have continued to decrease, as a strong Liquified Natural Gas (LNG) supply outlook help to soothe some of the concerns over low storage levels and weakness within the carbon markets weigh on contract prices.

In the graphs, you can see those contracts starting now (Spot) and those within the month ahead (M+1) are lower than they were last month. Those purchased now for the next season (S+1), have also decreased slightly when compared to December 2021.

A season in the business energy market is a 6-month spread and these are from April to September for “Summer” and October to March for “Winter”. Purchasing these “future prices” now for contracts starting from next summer are lower, due to the expectation that the current gas volatility will have calmed, demand will have decreased, and energy stores will have grown.

Demand is also expected to strengthen as global economies begin to to recover from the new Coronavirus, Omicron variant. 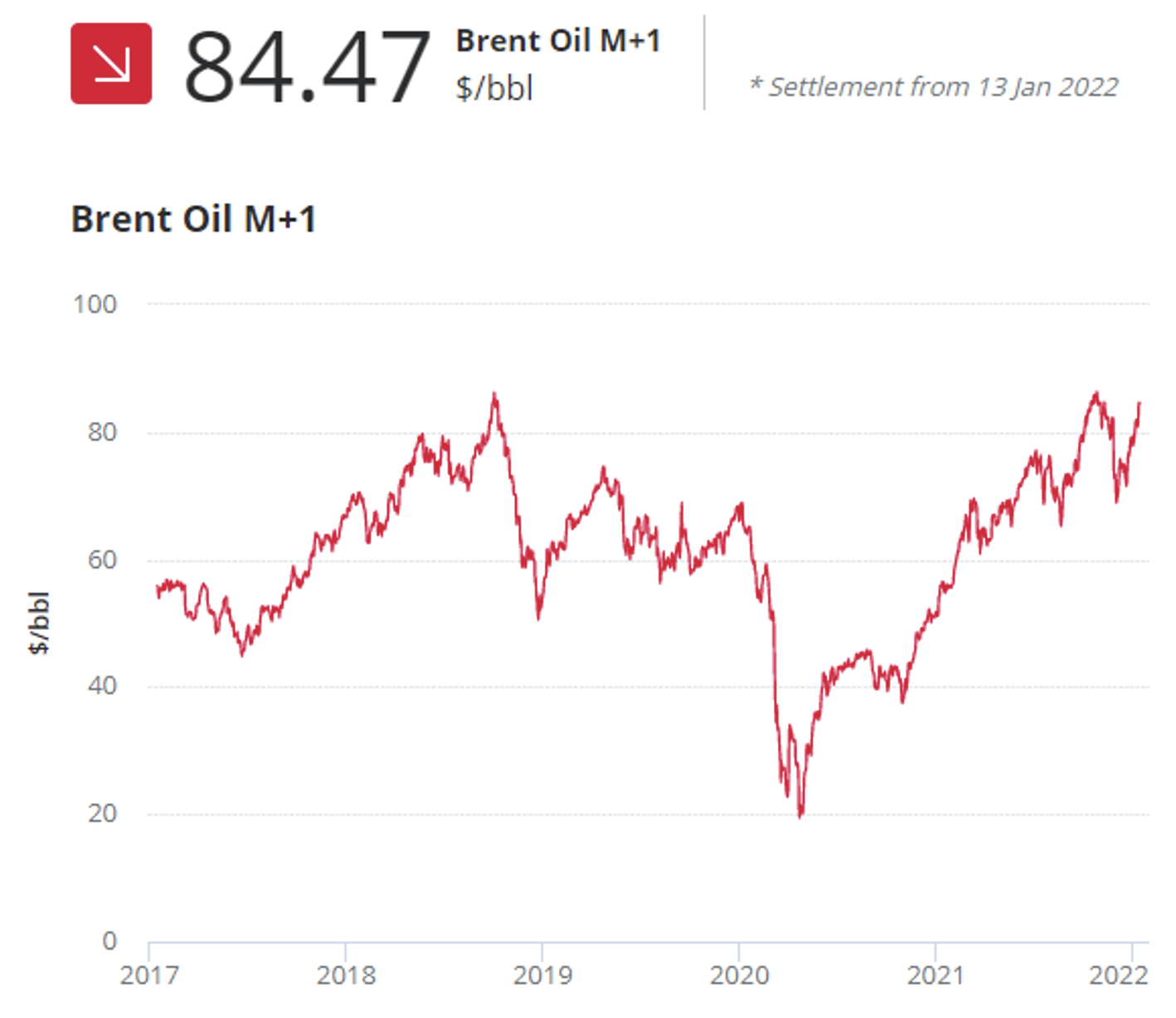 Russian President Vladimir Putin has been accused by energy monitors of significantly reducing Russian gas supplies to the rest of Europe to further his agenda over the Nord Stream 2 pipeline.

Fatih Birol, the head of the IEA has blamed Russia for worsening Europe’s natural gas crisis and even implied that the Kremlin was manufacturing an energy crisis for political ends at a time of “heightened geopolitical tensions”.

Europe is still in a gas shortage crisis as Russia decreased its supply of gas which pushed prices to record highs at the end of 2021. Since then, a pipeline that sends gas from Russia to Germany (the Yamal Europe Pipeline) has been in reverse for 3 weeks.

According to Biriol, President Putin was choking gas supply by holding back at least a third of the gas it could feasibly send to Europe. He said, “I would note that today’s low Russian gas flows to Europe coincide with heightened geopolitical tensions over Ukraine. Russia could increase deliveries to Europe by at least one-third — this is the key message.”

One-third of the gas supplies amount to approximately 10% of Europe’s energy needs however Russia has been signing new supply deals or revamping long-term contracts outside of Europe, demonstrating how they are no longer fully dependent on Europe for its commodity revenues. The pressure is now on Brussels, and it is thought that if the EU does overstep here, it could face further energy emergencies in the future.

With wholesale gas prices still high and numerous UK energy suppliers collapsing, many of the remaining suppliers have increased their “deemed rates” even further. These are the standard rates customers pay when they fall out of contract.

Business energy does not have the same rules as domestic, so whilst homeowners are protected by the Ofgem price cap to how high they can increase their deemed rates, businesses do not have this luxury. We have seen some deemed rates increase for business customers who were not aware the price cap does not apply to them and have been left out of contract and paying substantially higher rates than needs be.

This is due to the perceived risk of energy suppliers taking on the current costs of new customers. Many suppliers usually purchase the energy needed for the customer when they sign the contract and hedge their bets on market movements. However, with the cost of wholesale gas so high, the market is still tumultuous, and suppliers are unable to increase the costs for those domestic customers who are not in a contract. As such suppliers have increased their deemed rates for businesses to cover the extra costs.

Fixing a contract rate now if you are out of contract or due for renewal within the next 18 months is worthy of consideration to ensure your business is not paying over the odds for your energy when it can be avoided.

The Path to Net-Zero:

In 2019 the UK government committed to a target of reducing the net emissions of greenhouse gases by 100% by 2050, compared to the levels in 1990, to keep global warming under 2 degrees.

Since Cop-26 many businesses have started to look at their carbon footprint and how to reduce it. However, many businesses do not fully understand what the term “net-zero” means or how to achieve it. Net-zero refers to achieving a balance between the amount of greenhouse gas emissions produced and the amount removed from the atmosphere.

It will soon be mandatory for businesses to have a Carbon Reduction Plan in place. This is a base document, articulating a business’s strategy; not just for reporting, but also for demonstrating their intentions to stakeholders and up and downstream supply chain partners, customers, and corporate finance.

You can only really have a path to net-zero if you can measure your carbon footprint. Mission can support and guide you to reduce your businesses carbon footprint as well as to measure and manage the energy you use, by making impactful changes such as switching to renewable energy, by installing EV charge points and installing carbon management software to measure, report and learn where you can reduce the energy your business uses.

Please contact us should you wish to discuss any of these points further.

Stay up to date with all our latest updates, news and events.